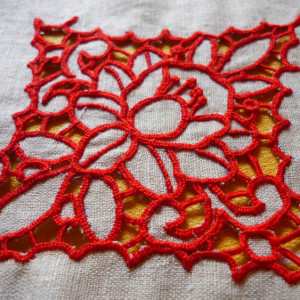 In what appears to be a unlikely connection, a French clergyman ended up inspiring the production of a kind of lace that has become of the finest in Brazil.

It all began in the 17th century, when French power broker Cardinal Richelieu, who served as chief minister to Louis XIII of France, wore elaborate uniforms trimmed with finest, intricate lace – he even brought lace-makers from Italy to France in 1624 in order to teach their skills to French crafters who would maintain his swashbuckling wardrobe.

The exact origin of Richelieu lace in Brazil is unknown, but it is understood that it was introduced by Europeans to local craftswomen in the early 1900s, who adapted it with a traditional local folk flair.

Richelieu lace is made mainly on linen-type fabrics and has special requirements for a perfect finish. The spaces to be cut on the fabric around the design are then woven with thread – the so-called “brides” which then form the links between the patterns.

This variety of lace is highly sought after and is seen on a variety of items including bath towels, doilies, curtains, shirts, quilts and paintings, giving a touch of regal beauty anywhere it is placed.

The Brazilian capital of Richelieu lace

The small town of Barra Longa, in the Brazilian state of Minas Gerais, has become a reference in Brazilian Richelieu lace. With a population of only 6,000 people, many of the women of the town maintain the tradition alive by passing the art of bobbin lace down generations.

Even in towns such as Barra Longa, where many women live out of Richelieu, they often do it during their “free time” at home. To make sure they can make enough to earn a living, they juggle their intense routine of embroiderers, mothers and housewives.

Since lace is such a big part of these artisans’ livelihoods, their craft  blurs with everyday life, family life and their leisure time and becomes not only  a source of work and income, but a fun past time  and also as a way to consolidate  social and affective ties.