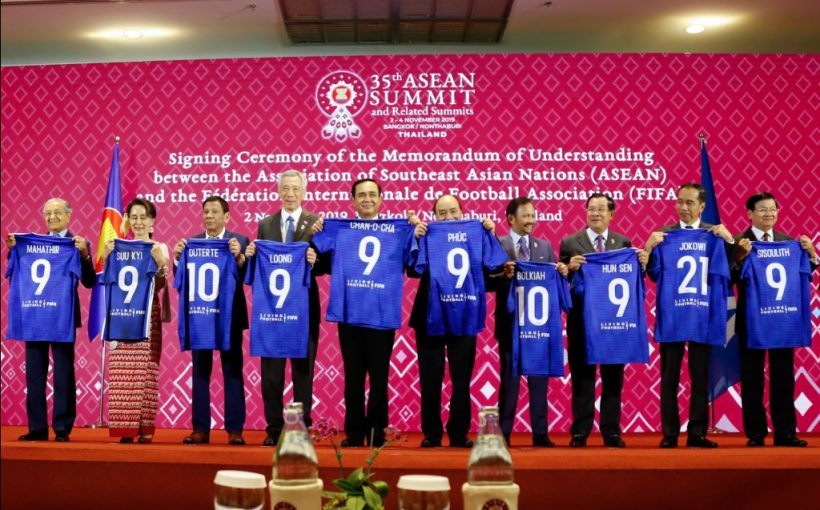 The Association of Southeast Asian Nations (ASEAN) leaders received blue jerseys with their surnames at the back after forging an agreement with FIFA on football collaboration last Saturday.

During the signing ceremony, President Duterte and Brunei Sultan Hassanal Bolkiah got jersey number 10 as heads of states, a number associated with the great football players.

Seven other heads of government of Malaysia, Myanmar, Singapore, Thailand, Vietnam Cambodia, and Laos, on the other hand, got number 9 shirts usually worn by strikers. Indonesian President Jokowi Widodo was the only leader with the number 21 jersey, which indicated his country as host of the 2021 Under-21 World Cup.

The football shirts were handed out by FIFA President Gianni Infantino to the ASEAN leaders as they gathered onstage.

Duterte was the last leader to receive a jersey after his numbered shirt was momentarily retrieved from the FIFA staff.

Under the MoU, ASEAN and FIFA agreed to cooperate on the promotion of sports integrity, sports for development, FIFA’s Football for Schools Program, and professional capacity building.

The memorandum marks the establishment of formal cooperation between the two entities to leverage the roles of football in social development in ASEAN. They aim to place football as a catalyst for social development, including through the promotion of healthy lifestyles and values of sportsmanship.

The agreement was signed by Infantino and ASEAN Secretary-General Dato Lim Jock Hoi during a ceremony witnessed by the regional leaders at the IMPACT convention center.

“It’s a true honor, it’s a true pleasure to be here, I’m very excited about the journey that we are starting today. It is our duty and our task to come here, to work together and to invest. To invest in football, in our youth, in your boys and girls because as we know it football is a school of life,” Infantino said.

Hoi said football was a strategic means for promoting greater people-to-people connectivity and binding ASEAN stronger as One Community.

“Through this MOU, ASEAN looks forward to a stronger football and sporting community in the region that builds on our unique regional identity and sense of community,” he said.